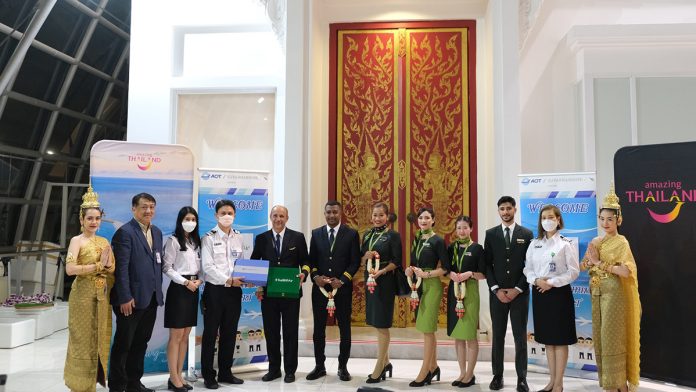 Oman based airline SalamAir has launched a new three-times weekly direct service from Muscat to Bangkok – its second destination in Thailand after Phuket.

The Muscat-Bangkok flights will operate on a Sunday, Tuesday and Friday, with the return Bangkok-Muscat flights operating on a Monday, Wednesday and Saturday.

The Tourism Authority of Thailand (TAT), in cooperation with public and private sector partners, has arranged a welcoming ceremony at Suvarnabhumi Airport.

Mr. Chaiwat Tamthai, TAT Director Dubai Office, said “The new Muscat-Bangkok route introduced by SalamAir will help the TAT significantly in our efforts to grow the Oman market to Thailand. Together with the existing Muscat-Phuket flights, it will offer Omani travellers both increased seat capacity and route flexibility in visiting the kingdom.”

SalamAir launched its Muscat-Phuket route in December of 2019, and the pre-pandemic period of 2019-2020 saw the TAT working closely with the airline to promote Thailand as a preferred travel destination in the Oman market.

On its introduction the service from Muscat to Phuket operated three times a week; now the frequency has been boosted to four weekly flights which depart the Omani capital on a Monday, Tuesday, Thursday and Saturday.

The cooperation between the TAT and SalamAir has included a fam trip to Phuket in January of 2020 for travel agents from the United Arab Emirates (UAE), and most recently a joint sales promotion that ran from 1 November-15 December, 2022, promoting Thailand in the Gulf Cooperation Council member states of Bahrain, Kuwait, Oman, Qatar, Saudi Arabia, and the UAE, and also Iran. This promotion was focused primarily at first-time visitors to Thailand.

Established in 2016, SalamAir is a low-cost airline operating to over 30 destinations around the world from its base in Muscat, including Bangkok and Phuket in Thailand. Its fleet comprises 180-seat Airbus A320neo and 212-seat A321neo aircraft.