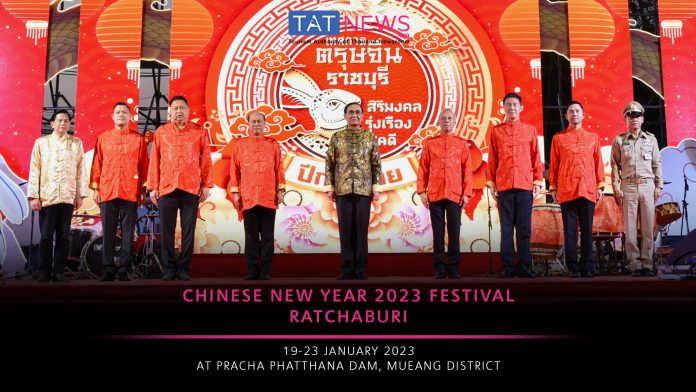 Also present at the ceremony were H.E. Mr. Phiphat Ratchakitprakarn, Thailand’s Minister of Tourism and Sports; H.E. Mr. Yang Xin, Charge d’Affaires of the Embassy of the People’s Republic of China to Thailand; and Mr. Ronnaphob Ruengphairote, Governor of Ratchaburi Province, as well as senior officials and key figures from the Thai public and private sectors.

Tourism Minister Mr. Phiphat said, “As one of the oldest and largest Chinese communities in Thailand, Ratchaburi is known for its unique character and identity that is strongly influenced by Chinese culture. Here, the local people continue to preserve its well-integrated culture and traditions through such annual festivals as the Chinese New Year.”

The Chinese New Year 2023 celebration in Ratchaburi is among the festivities in Bangkok and four other provinces with large Chinese communities – Nakhon Sawan, Suphan Buri, Songkhla (Hat Yai), and Phuket – supported by the Tourism Authority of Thailand (TAT) to honour the 48th anniversary of diplomatic relations between China and Thailand.

TAT estimates that the Chinese New Year 2023 celebrations, will help generate 21 billion Baht for the Thai economy through an array of activities, including travel and tourism related expenses, to paying homage to revered Buddhist images for blessings, at destinations across Thailand.

During the period, it’s expected Thailand will record 1.38 million domestic trips and generate about 4.6 billion Baht in tourism revenue, and welcome about 580,000 international tourists to Thailand– mostly from Southeast Asia – and generate approximately 16 billion Baht.