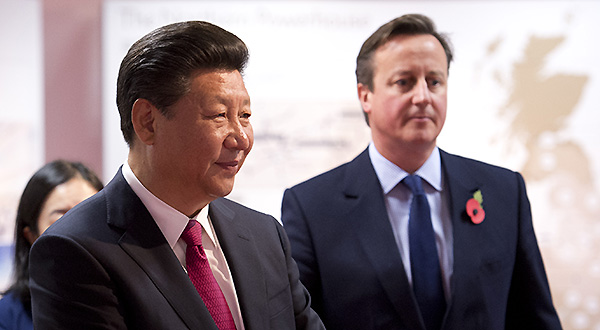 Last week’s official UK state visit by Chinese President Xi Jinping has been interpreted in a variety of ways. The BBC referred to the lavish welcome afforded the Chinese head of state as a “redder than red carpet welcome”, while in the Guardian, comedian Stewart Lee satirized it as one big Royal ass-kissing.

British Prime Minister David Cameron touted the four-day stopover as the start of a “golden era” in relations between the two countries, desperately trying to sell the burgeoning alliance as a “win-win”.

Others saw much more serious consequences to this apparent sea-shift in British international relations.

Regarding the new stage in Sino-British relations, two thoughts spring to mind:

Yes, there was pomp and circumstance aplenty. But there are more immediate and concrete aspects to this meeting of an old European colonial power and what some general — be it Napoleon or Yamamoto or only fictive representations of either — may have once referred to as a “sleeping giant”. Apart from Royal overtures and diplomatic genuflections, what were the principal results of Xi Jinping’s London minibreak?

We see no conflict with having that very special relationship [with the US], with wanting to be a strong partner for China as the Chinese economy continues to grow and China emerges as an enormous world power.

Some highlights of China’s state visit to the UK

Can Fintech drive a strong post-COVID-19 recovery in Asia?